The CPF scheme has failed Singaporeans and the abuse of our national pension system looks set to worsen.

Thanks to Roy, an increasing number of CPF members have become acutely aware that we have been shortchanged by the PAP government. The CPF issue has become too hot a political potato for PAP that the “ReturnOurCPF” protest at Hong Lim Park had to be shut down.

Hong Lim Park protest – citizens forced to beg for the return of our CPF. 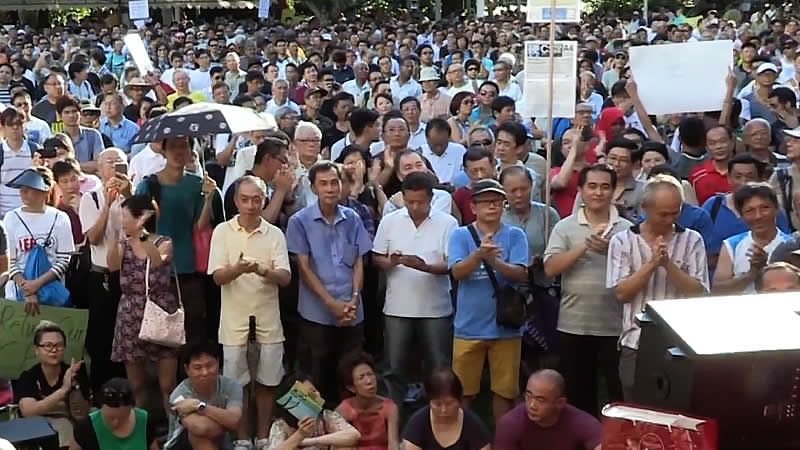 Due to the pressure from (mostly) Roy and opposition party members like Kenneth J, Chee Soon Juan, etc, PAP has reluctantly agreed to a partial return of 20% when CPF members reach 65. But how is returning only 20% from the 100% taken away supposed to appease CPF members? What about increasing the withdrawal age from 55 to 65 and paying the balance 80% in a till-you-are-in-a-coffin installment plan?

As PAP attempts to avoid paying back every single cent of CPF to their rightful owners, more Singaporeans will suspect and speculate on the government’s ability to pay, ie there are huge CPF investment losses.

PAP must come clean and address the issue of transparency or it will arouse even more suspicions.

Any pension scheme with employees contributing 36% (at one stage up to 50%) of wages for 35 years but unable to retire comfortably must fit the definition of failure, ie our CPF.

The PAP should not micromanage our needs unless it is willing to state very clearly that CPF will be insufficient and members would need to fund our retirement by selling our homes.

Through frequent tweaks by an unchecked Paliament, our CPF has continued to be abused right under our noses and excess returns earned from CPF invested by GIC are still being retained by PAP.

Most of us are only aware that CPF interest rates are presently way below our real inflation rate. But CPF rates had fallen below the official inflation rate in the past, such as, from 1972 to 1981. Sub inflation CPF rate is one of the causes of our CPF retirement shortfall.

In 1982, Minister Toh Chin Chye confirmed that our CPF was used for “the construction of new factories, installation of new plant and equipment, expansion of infrastructure such as roads, ports and telecommunications, the building of houses and so on.” The use of our CPF was instrumental in creating the Singapore ‘success’ story.

Since 1970, our GDP per capita has increased by more than 5000%. But why are total CPF interest rates are not even 5%? Relative to our economic growth, CPF was really a VERY CHEAP SOURCE OF FUND.

When CPF members are paid between 2.5% and 6.5% to generate phenomenal economic growth, how can this not be termed ‘abuse’?

An easier to understand example of how CPF was abused would be Singtel. By 1990, Singapore had its one millionth phone line and became one of the first countries in the world to have a completely digital telephone network. Billions of CPF were used to fund the construction of Singtel’s network but the beneficiaries of Singtel’s returns are Temasek and Singtel shareholders.

PAP has no intention of distributing Singtel’s, and other GLCs’, returns to CPF members. Although Temasek has since reduced its shareholding to 52%, all the billions in divestment proceeds have been reinvested, excluding an average of more than $1 billion in dividends since its listing.

From 2007 to 2014, GIC received $136 billion of CPF. It had taken 52 man years for CPF members’ balance to hit this amount but 7 years to double it. Why would GIC urgently need $136 billion for investment when all asset prices are inflated?

GIC certainly could not have been able to return all CPF members’ monies at 55. In fact, it can’t even return us at 65 and that’s the reason for the derisory 20% lump sum. Only the ignorant will buy into the PAP’s Chee-Koh-Pek-will-spend-all-his-money-at-Batam propaganda. Read about this busted CPF myth here.

There are Singaporeans who think the world of PAP and to them, huge CPF losses are impossible. Think again.

When PAP town councils sold their computer software, developed with millions of public funds, to a PAP company in 2011 for peanuts, most had thought this impossible.

In our law-abiding abiding country, overturning police cars and setting them on fire could not have happened. Impossible! PAP MP Intan who blindly supported a Chinese cheat’s PR application while the MOM and ICA were slumbering was also an impossibility.

Every DBSS project, HDB’s so-called premium public flats, has ‘too many’ complaints that a task force to look into them was set up by Minister Heng. This has never happened in the past. And one would have thought an MOE minister assisting the MND was impossible too.

‘Impossible to happen’ in Singapore seems to be happening more regularly. So ‘impossible’ for huge amounts of CPF investments to be wiped out is really not impossible after all.

PAP has been trying to convince Singaporeans that all is well with our CPF but citizens demand nothing less than total transparency. PAP seems to have mistaken public monies as its own funds.

Increasing token CPF interest rate may appease some and maintain whatever little confidence in the system but for how long? How long will PAP continue to prevent the disclosure of information which belongs in the public domain? Will PAP be forced to do so after the next financial or when it loses its parliamentary majority? Will losses be manageable by then?

It’s only after scrutiny of GIC’s investments that I have realised the media-created image of GIC is totally different from reality. GIC has not been managing but sitting on many underwater investments and in some cases, threw good money after bad. Opacity is not a hallmark of a good fund manager.

PAP is the servant of the people and it can’t simply disengage us at its whim. CPF protests at Hong Lim Park would not have taken place if PAP had addressed our unhappiness. Despite having written tonnes on the CPF, PAP did not engage Roy; instead, PM Lee took offence and opportunity at a blogpost to take legal action which will lead to Roy’s bankruptcy.

It seems CEOs of statutory boards such as CPF Board are paid to act dumb, requiring their paramount leader to resort to legal means to silence criticisms.

Concerned citizens, including me, are not ‘too free’ to spend hours researching and posting articles for the sake of sliming PAP. Many are not even members of any political party and stand to gain nothing from months of effort. As expected, there are factual errors (honest mistakes) but why have they not been pointed out? If members of the public are not reading the ‘right’ things, isn’t it the government’s responsibility to engage us by providing factual figures? Or perhaps the government agrees to most of what has been written.

The total balance of our CPF is not $282 million but $282 BILLION. GIC should not be allowed to continue managing our CPF without providing a proper set of accounts as it would be logical to suspect something’s not right.

Too many CPF questions abound but after having concealed information for decades, it’s unlikely PAP will be providing an answer to the $282 billion question.

This entry was posted in CPF. Bookmark the permalink.