For decades, PAP has been telling HDB flat buyers that we own our flats.

But according to legal documents, buyers sign off as lessees with HDB the lessor.  Buyers merely sign a Lease Agreement, not a Purchase and Sales Agreement.

That we need to seek HDB’s approval also confirms buyers’ non ownership of HDB flats.  But the majority of buyers prefer to continue believing in lies because truth hurts.

Even banks can confirm our non-ownership status, ie HDB flats cannot be mortgaged.

What about government website Singapore Statutes Online which has also stated clearly that buyers are in fact only lessees? 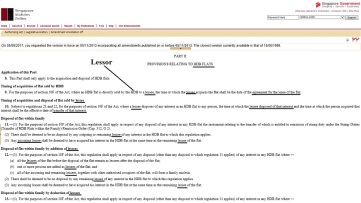 PAP should really not call the kettle black when it is the biggest perpetrator of fake news. 😉

So, do HDB buyers own any HDB flats or kena owned by PAP instead? 😦

HDB buyers DON’T have a title deed / strata-title deed.
If you check the actual title deed lodged in the S’pore Land Authority for the land parcel that your HDB block / neighbourhood sits on, you will see that the actual owner is HDB.
What you have is merely a Lease Agreement to the apartment (pigeon hole in the sky), and this is also recorded as such in SLA.
Example: https://www.sla.gov.sg/INLIS/samplePDF/HDBLS.pdf
The above is an actual HDB “Title” lodged in SLA — which clearly states HDB as Lessor & the buyer as Lessee.
SLA is under Ministry of Law, and the above documents are legal & recognized by S’pore Courts.

This entry was posted in HOUSING, POLITICS. Bookmark the permalink.