Singaporeans have been fooled/scammed for decades.  But many still believe in PAP’s fake rebates, subsidies and grants.  A few examples:

Subsidised public housing and CPF housing grant
Without knowledge of the component costs of HDB flats, HDB lessees should not accept PAP’s claim at face value because it’s akin to being a goondu.

HDB has insisted that new flats are subsidized but has yet to disclose the breakdown in construction and land costs.  It is true that HDB lessees of bigger flats have been subsidized but that’s only after PAP has anyhow included a few hundred thousand dollars in land cost.

Singaporeans should take note that PAP’s rebates/subsidies/grants are always discounted from self-inflated prices.

Will anyone buy a low-end car at $200,000 simply because the manufacturer claims an unbelievable discount of $100,000 has been given?

That grants need to be given to middle-income buyers of EC and more expensive DBSS flats is a joke.  The real reason for CPF housing ‘grants’ is obvious: to prop up property prices using tax dollars.  Although higher property prices increase other costs, they ultimately result in additional government revenue in the form of higher income taxes, GST, etc.  It creates an illusion of wealth at the expense of ordinary citizens. 😦

Common sense also tells us that when housing is unaffordable, prices need to correct.  Instead, PAP has continued to prop up prices using CPF housing grants.

By first inflating housing prices and subsequently giving buyers grants, isn’t this type of grant and subsidy as fake as ‘news’ in our MSM?

Healthcare subsidy/grant
As mentioned earlier, PAP first inflates its own costs to create the illusion of providing massive assistance to citizens.  An example of how PAP increases healthcare cost at its whim:
Polyclinic consultation fee ‘grant’.

We know that the 70 to 80% consultation fee grant is fake because the ‘full amount’ has been inflated to more than double the amount charged by a private GP.

Public/restructured hospitals have also been engaging in such a practice since corporatization of public healthcare more than 2 decades.

HDB flat buyers should cease deluding themselves that they are owners.  Try going to a bank and mortgage your HDB flats to confirm that all HDB flats belong to only one owner.

Payment of property tax for HDB flats has somehow convinced most HDB lessees that they are owners.  However, this is merely another scam by PAP: Lessees should not be paying any property tax.

Property tax for HDB flats have decreased by almost 50% since the last increase in 2010.  In view of property prices having increased since 7 years ago, something appears to be amiss: property tax should have increased.

Could it be that as more HDB lessees become aware of our true status as non-owners, PAP has realized that the game is up and will soon decrease taxes to zero?

Before the introduction of MediShield Life scheme in 2015, MediShield scheme was likely to have been the “most profitable national health insurance scheme in the world“.

With increased MediShield Life premiums and legislating every resident under the new scheme, PAP continues to be the most profitable insurer in the universe.

PAP is aware that its self-inflated premiums are too high and has given ‘subsidies’ to more than 2 million residents insured under its healthcare plan. 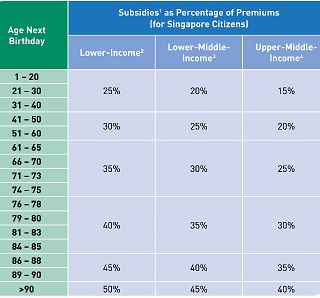 PAP has also realized that the majority of elderly Singaporeans who have to pay more than $1000 annually could not afford such premiums.  To show how caring it is, all ‘pioneers’ will be given “special premium subsidies”.

There are of course other examples of fake subsidies, rebates and grants.

Without transparency and checks, PAP might as well inflate costs much higher and claim that ordinary citizens have it much better in Singapore than any other country, not just the poor.

For example, why not increase polyclinic consultation fees to $100 and trumpet to the whole world that a 93% grant is given to children?

Or increase the price of a 2-room flat to $200,000 and subsequently offer a 6-figure CPF housing grant?

Time for book smart Singaporeans to wake up and cease believing in PAP’s fake subsidies, rebates and grants.  Why continue to be goondus?