If Tan Cheng Bock runs for president, PAP will be damn siah sway

Former presidential candidate Tan Cheng Bock’s appeal against the High Court dismissal of his constitutional challenge on the reserved presidential election will be heard on July 31.

Instead of the usual 3 judges in the Court of Appeal, there will be 5. But will the outcome be any different? Will Tan be running for president? The answer – and the reasons – should be obvious to any thinking citizen.

PAP came up with the reserved PE because it can ill-afford to have a PAP-unfriendly president. He/she must be willing to act deaf and dumb on the opaque management of $1 trillion (akan dating) of our reserves and CPF. For almost 6 years, won-2011-PE-by-a-whisker Tony Tan has never been serious about how our reserves have been managed. How many times did billions leave the reserves vault since 2011?  Why hasn’t Tony disclose this to Singaporeans?

The PAP government has also disclosed that it is the AGC which had counted “5 consecutive presidential terms beginning with President Wee Kim Wee“. If the High Court judgement is overturned, it would mean the AGC had given PM Lee the wrong advice. This will severely embarrass the AGC, which is very unlikely to happen.

In a coincidence of sorts, the AG somehow happened to be PM Lee’s former personal lawyer. At 63, Lucifer Wong was appointed AG to replace then 60-year old V K Rajah. 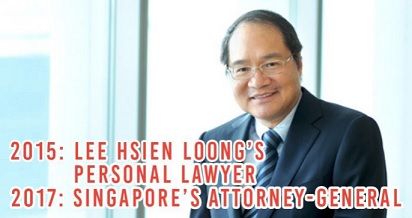 And the newly-created position of DAG also somehow happened to be filled by … former PAP MP Hri Nair. Many career civil servants who were clearly more qualified for the two top posts in the AGC were again somehow not that qualified under PAP’s system.

I have a feeling that somehow Tan will also not be running for president.

PM Lee has also said that the government had thought about the reserved EP for a long time. Since the PAP had already made up its mind years ago, nothing will stand in its way after endorsement from a rubber-stamping Parliament.

Which community highlighted the need for a reserved PE? None.

Who were the members of the secret reserved PE committee who had decided for Singaporeans without consultation? It’s so secret that only members of PAP’s inner circle know.

Having a reserved PE is undemocratic and has made Singapore into an international laughing stock. But PAP clearly didn’t mind becoming the butt of foreigners’ jokes so long as it continues to hold onto power.

The risk of having a PAP-unfriendly president is just too high: it may expedite PAP’s downfall. This is because such a president may shed light on the management of almost $1 trillion of reserves and CPF, ie the true performance of GIC and Temasek Holdings and how top management enriched themselves may prove all too embarrassing. 😦

Pretty certain that Tan won’t make it for PE 2017 because this will make PAP damn siah sway.

2 Responses to If Tan Cheng Bock runs for president, PAP will be damn siah sway