Below is an imaginary email to the government by an intelligent (not book smart) NSF.

I would like to thank the government for ‘finally getting free insurance’ after 49 years but am unable to because this has happened only after too many NSFs have died during training.

We, NSFs, are not ungrateful complain kings the government-controlled media make us out to be. Instead, we have learned to be as pragmatic as PAP. I recall LKY’s emphasis on pragmatism where the state and Singaporeans only have a transactional relationship.

Free insurance coverage for NSFs and NS men after 49 years, thousands injured and too many deaths.

The belated introduction of NS insurance coverage has shortchanged thousands of injured NSFs and families of dead NSFs, eg between 1994 and October 2003 alone, 37 NSFs had died during training. Without the financial resources to file an appeal, the victims’ families must have been compensated with derisory amounts or what our elites call peanuts.

‘Peanuts’ is a favourite elite word 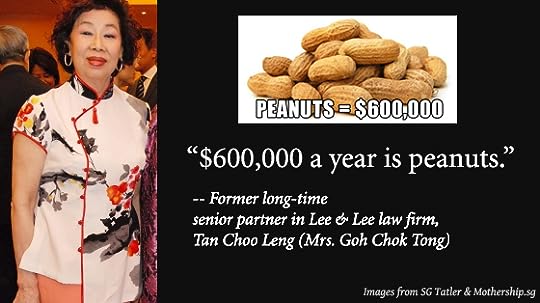 The need for insurance is pretty much common sense. But you scholars only display common sense when it comes to increasing your own ministers’ pay. If NSFs are indispensable, how come the monthly allowance of a recruit has increased by only $540 from $40 to $580 while yours by $179,000, from $3500 to $183,000 since half a century ago?

While you scholars were helping yourselves to gargantuan amounts of tax dollars, our insurance need was ignored. So how many NSFs’ families have fallen victim to your self-serving policies?

Singaporean youths are not stupid: when we are paid peanuts, how could you not expect to have ‘chao keng’ monkeys? I mean, if MPs are paid $1000 a month instead of $15000, won’t they also chao keng and try to skip as many MPS as possible?

Self-serving leaders are also lousy leaders. And talking about poor leadership, we have already witnessed too many ex paper generals in the private sector or as politicians, eg clownish Keechiu Chan, NOL CEO who sold our national asset because of his failure to turn it around, etc.

Another one who inspires no one is Tan Chuan Jin who anyhow claimed that elderly Singaporeans collect cardboards as a form of exercise. I am sure Tan wasn’t lying but he was clearly spouting a half truth. Tan arrived at his ‘exercise’ conclusion by speaking to a few elderly collectors and relied on the findings of a youth group.

Tan was not bothered about the plight of those ‘working out’ under the scorching sun but seized the PR opportunity to show the world that elderly Singaporeans collecting cardboards is really a non issue.

Should NSFs respect leaders who tell half truths and avoid solving issues?

On the issue of our transactional relationship, I hope you won’t blame me for being as calculative as PAP.

If I were employed in the private sector and not serving NS, the average monthly income lost is about $1000 (excluding CPF) including the pittance from Mindef. This works out to roughly $24000 for 2 years. What about another 6 months of pre- and post-NS time spent waiting?

On top of the financial cost, a foreigner graduate would have more than 2 years of work experience by the time I graduated. How am I supposed to compete with them when employers view them more favorably? Can the government really expect me to give my all after screwing up my future?

Isn’t the government aware that university fees increase by about $1000 during the 2 years serving NS? For the elites, this is of course, again, peanuts. Should I abandon common sense and sacrifice while the odds are increasingly stacked against me by PAP?

For a diploma holder who has gone the longer route via ITE, he would have lost 4 years of work experience to foreigners with similar qualifications. Is it really not the end even before one starts his career?

During my dad’s time, they gladly served NS because their basic needs were taken care of by the government. Presently, the incompetent government has created issues related to all our basic needs. Pray tell how I am supposed to be a motivated NSF.

Seriously, I would also gladly do the same as my dad. Unfortunately, this is impossible when our present leaders are all self serving.

The belated introduction of NS insurance coverage by 49 years and after too many deaths makes no difference to my lack of motivation.

This entry was posted in NS, POLITICS. Bookmark the permalink.