Singaporeans had better start to give some thought to our lax immigration policy and not be afraid to question PAP’s failure.

If the immigration policy is not a failure, PAP would have been able to disclose statistics such as new citizens’ contribution to increasing the TFR or list the types and number of good jobs created. I’ve queried the NPTD and it appears there are no supporting statistics to confirm policy objectives have been met and Singaporeans should be worried because we have been taken for another ride.

Since about 90% of the 20000 new citizens come from the stock of PRs, 18000 PRs must have converted to new citizens. This would mean 11800 PRs (29800 – 18000) gave up their PR status every year since 2012. PR status is coveted in every country but third world foreigners seem too happy to give up their first world PR status. It appears we hold the world record for the highest number of PRs who balik kampung every year. Uniquely Singapore.

If a similar ratio of citizens were to migrate, 75000 Singaporeans would have settled overseas every year. Unlike citizens, PRs have no loyalty to Singapore. PAP somehow liken PRs to Singaporeans and we are classified as ‘residents’. This prevents public scrutiny of its flawed immigration policy.

2 Countries with real long-term planning do not suka suka increase the population as if playing SIM City. The largest population increase:

Did Singaporeans pay top dollar to politicians for an increase-population-to-increase-GDP model? Is this even remotely related to resolving our ageing population issue?

3 It appears PAP has already reached the point of no return because there will no GDP growth without an artificial population increase. 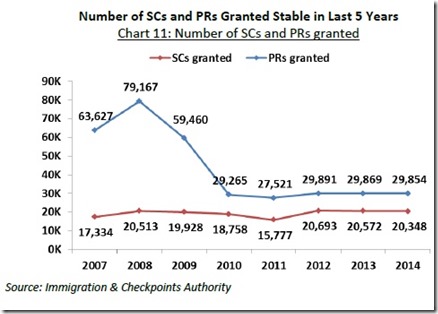 When PAP patted itself on the back for doubling our GDP from 2007 to 2014, it really had nothing to do with creating good jobs for Singaporeans. It was about increasing the foreigner population to create fake economic growth and reduce wage cost for businesses, especially government-linked companies.

To sum up, Singaporeans should be aware that the real objective of our immigration policy is unrelated to PAP’s stated objectives of tackling an ageing population issue or increasing our TFR.

Before 2007, new citizens averaged 8200 annually. But from 2007 to 2014, PAP increased the yearly average intake to 19240. Since new citizens will exacerbate our ageing population issue years down the road, isn’t PAP creating a problem to resolve another problem? Is this long-term planning?

PAP’s self-praise statements about its ‘successful’ growth model have always been unsupported by statistics. Singaporeans must learn to discern facts from propaganda.

PAP’s immigration policy has already created many issues and will continue to do so because its real objective is to increase headcount and GDP.

This entry was posted in IMMIGRATION. Bookmark the permalink.