Born with a silver spoon in his mouth, Lee Hsien Loong never understood the issues faced by ordinary Singaporeans.

Lee has also never worked a single day in the private sector. His meteoric rise to become the youngest Brigadier General by 32 was without a minute of battle experience but based on academic results. He was parachuted into politics and his career has been smooth as silk, ie immediately made a Minister of State and became DPM in 8 years time.

Lee has understudied his daddy, LKY, since 1963 and he is convinced daddy’s methods will work for him because they had worked wonders last century, such as:

– the use of propaganda to paint a whiter than white PAP.
– cultivate fear among citizens.
– abuse the civil service to perpetuate PAP’s control.
– take legal action against ordinary citizens to frighten other dissenters.
– conduct internal investigations instead of independent ones.
– NEVER apologise for any mistake to impress the public on PAP’s perfection.
etc.

Lee has shown he is bankrupt of ideas to bring our country forward.

GE 2015 is not about elected MPs managing town councils. Does Lee not have an inkling of the issues we are facing? Wasn’t he listening to his constituents during his MPS? Is he not bothered because his $2.4 million job (including MP and town councilor’s allowance) is not at stake, or so he thinks?

For years, Singaporeans have been complaining about the huge influx of foreigners which has created all social problems, putting a strain on our inadequate infrastructure, depressing wages and causing unnecessary retrenchments.

But Lee’s ‘solution’ is to continue increasing the population with a disproportionate increase in the foreigner/citizen ratio. Lee had in fact made up his mind on ignoring our concerns when he pushed through the PWP in 2013.

Hong Lim Park protest – Singaporeans were fed up with the PWP but Lee simply ignored our concerns. 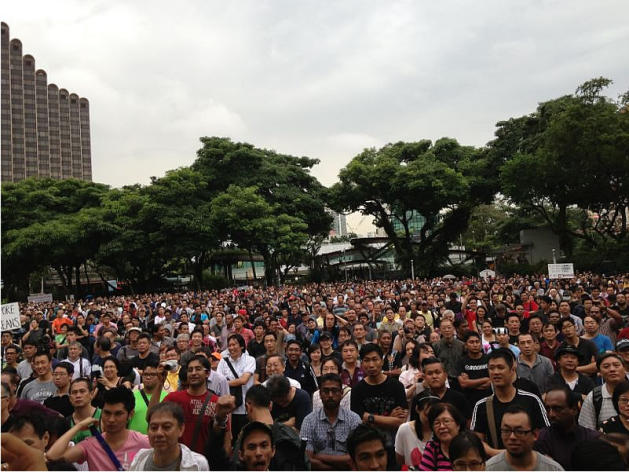 If Lee has improved the lives of Singaporeans, he should have been able to state his achievements without resorting to propaganda. He can’t because his ‘achievements’ are in fact insurmountable problems.

Without any achievement to trumpet, he simply relied on his daddy’s achievements some 3 decades earlier and using PAP’s mouthpiece to redirect voters’ focus on his incompetence to AHPETC’s management.

Out of the blue, a million posters of Lee’s face has been plastered not just in AMK GRC but all over Singapore. Hmm… to keep watch over citizens?

to Jurong, Lee’s futile attempt to increase his popularity.

It seems PAP MPs are useless and cannot win in an election without the ‘support’ from Lee.

In 2013, PAP’s Khaw Boon Wan, MND minister, said he wanted “new flat prices in non-mature estates at around four years of salary”. According to a TRE article, the ratio of median annual salary to the price of 4-room new BTO flats in Sengkang is 5.4. The World Bank considers this ‘severely unaffordable’ (table below).

When Khaw opened his mouth, citizens of average intelligence already knew this was an impossibility. With 4-room HDB resale flats costing about $400,000, new 4-room flats will never cost $200,000 or around “4 years of salary”. This was clearly a seductive lie.

Typical of PAP, Khaw refuses to acknowledge he fell short on his promise and insists that one should be looking at it from the perspective of home ownership, ie 80,90 per cent of Singaporeans owning their homes is confirmation of affordability. Khaw never ceases to amaze with his TKSS but he should seriously reconsider insulting Singaporeans in future.

Resale HDB flats cannot be conveniently excluded from the definition of affordability. But PAP doesn’t want to include resale HDB flats because it would mean ALL 3-room and bigger flats are SEVERELY unaffordable.

To mask PAP’s failure in lowering housing prices, it simply increases the income ceiling from $10,000 to $12,000. Since more Singaporeans are eligible to apply, it will claim HDB flats are more affordable.

‘Affordable’ must mean less handouts from the government. Instead, the Special CPF Housing Grant will double from $20,000 to $40,000 with more qualifying after raising the household income ceiling raised from $6,500 to $8,500. If public housing is truly affordable, why should two-thirds of all households qualify for a $30,000 handout?

In which wealthy country is there a large number of citizens earning below $1000, requiring massive assistance from the state? Why are more Singaporeans living in the smallest HDB flat despite our GDP trebling since PM Lee became PM? Real or fake growth?

Why is PM Lee trumpeting to the world PAP’s ability to help citizens buy the smallest HDB flat available?

Lee has continued to delude himself that our failed CPF scheme works because “Singaporeans value CPF’s good returns”. The best evidence, according to Lee, is Singaporeans voluntarily put into their accounts $500 million last year.

Lee conveniently ignored statistics such as the number of CPF members who had put in $500 million. There were 3.6 million CPF members last year and all it takes is for 2% of members to put in $7,000 each.

Taxpayers have been shortchanged when the prime minister is required to explain our flawed CPF scheme instead of paper general (navy equivalent) Ng Chee Peng, CEO of CPF Board. No wonder Singaporeans are complaining that we have many ‘jiak liao bee’ civil servants.

Since 2004, the PAP government led by Lee Hsien Loong has consistently failed the people. Singaporeans are by and large forgiving but not when politicians demand the highest political salaries in the world. PAP has to be held accountable for its epic failure in housing, retirement, education, transportation and healthcare.

PAP gives the impression that it seeks public feedback but in reality, it has never listened to the people. As a result, it keeps compounding issues which should have been resolved years ago.

PAP’s focus on Lee Kuan Yew’s achievements many decades ago is confirmation that Lee Hsien Loong and Goh Chok Tong have basically achieved nothing for Singapore. An increasing number of citizens feel that PAP has been taking us downhill for 25 years by diluting our national identity, building 2 casinos, creating false demand by increasing the foreigner population, etc.

PAP is essentially bankrupt of ideas to improve the well-being of Singaporeans. We need more checks on the government.

4 Responses to 20150907 PAP bankrupt of ideas, checks on government needed