GE is around the corner and PAP has already started its vote-buying and propaganda. For the sake of your children and future generations of Singaporeans, it’s important that you do not allow fear or propaganda to sway your objective view of PAP.

PAP’s flawed policies have impacted you directly and it should be clear by now PAP will not change unless support is withdrawn from them. This has proven to work post 2011 GE.

If you have been scrutinising PAP policies, you would have already known they are pro business and pro rich to the extreme. This is the reason why our income gap has been widening and so long as PAP is not removed from power, the status quo will be maintained, probably worsen.

When PAP continues to cook up lame excuses to prevent us from knowing the facts about GIC’s performance, is the PAP serving us?

Temasek CEO and directors who manage our $223 billion worth of investments are likely to have been paid an estimated tens of millions of dollars from our reserves. Is it a service/disservice to Singaporeans when the PAP withhold all relevant information pertaining to Temasek directors’ remuneration?

Look at the status of our multimillionaire-big-shot PAP MPs – do you really think the rich will ever understand ordinary Singaporeans, much less serve us?

PAP MPs who mostly live in posh properties, some with private security guards, are not affected by the 1001 HDB rules and regulations affecting 82% of Singapore residents. What is the percentage of the rich who care more about society than making more money? So long as issues do not affect PAP MPs and ministers, they are simply not bothered.

Take the chronic issue of loan shark harassment in HDB estates – it has continued for 4 decades because this issue does not affect PAP MPs and ministers.

In a recent case, 2 HDB units were set on fire. Thousands of HDB residents have also been harassed in recent years with NO END in sight to this problem.

Hmm… Singapore got law or not?

The PAP government will of course insist it is serious in every case of harassment, but how are HDB victims being served when they have to continue living in fear or incur huge expenses by moving out? What about subsequent victims?

But when it comes to businesses, PAP deploys maximum public resources! In the case of vandalised ATMs, the police received reports on 7 May and arrested 4 suspects the following day!

In order to assist businesses expeditiously, “… officers from the Criminal Investigation Department, Police Intelligence Department, Central Police Division, Bedok Police Division, and Tanglin Police Division worked relentlessly to carry out extensive intelligence probes and ground enquiries”. So does that mean the police were relenting in the thousands of unresolved cases of loan shark harassment in HDB estates?

PAP also deploys maximum public resources when its image is tarnished, eg in the Toa Payoh vandalism case, the police mounted an extensive operation and arrested 5 suspects within 2 days.

a few hours later you don’t.

But when public structures are vandalised for at least a decade, PAP continues to be ‘bochap’. In the vicinity of Aljuneid MRT station, thousands of public structures continue to be vandalised with tens of thousands of illegal adverts. Since contact numbers are also printed on every illegal advert, vandals are in fact challenging the police. All it takes is just a phone call to bring in the vandal, no need to mount any extensive operation. (I urge the police commissioner not to continue sitting on a decade-old problem and go take a look for himself.)

PAP will maintain its tidak apa attitude so long as issues do not tarnish its image and businesses are not affected. For ordinary citizens, it’s “you die your own business”.

When it comes to healthcare, it’s no different. PAP and the rich are not affected by our innovative ‘corridor’ or ‘tent’ wards in public hospitals as they head straight to ‘A’ wards in private hospitals. If our public hospitals and doctors are really excellent, why the preference for private ones? Is PAP serving Singaporeans with such innovations? 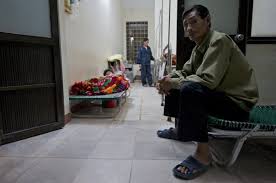 PAP MPs and ministers are also not affected by public transportation issues. Anyone with average intelligence knows the solution to overcrowding is a reduction in the foreigner population, not an increase. But PAP has insisted on increasing the population! Since GE 2011, morning and evening peak hours are still as overcrowded and all efforts by our PTOs have been negated by the increase in foreigner population. What about SMRT using 70% seatless trains during weekends? Will you wait till the day when SMRT comes up with 100% seatless train to be convinced you are not being served by PAP?

PAP MPs and ministers have never been bothered because they don’t travel by the same mode of transport. If they have been affected, rest assured they will not propose a ‘paper’ solution.

In a country with one of the highest cost of living, there should be a legislated minimum wage. But PAP says businesses will relocate if our labour cost is high without acknowledging its self-created problem of high rental. As the biggest landlord, PAP has a choice to profit from rental or allow citizens to earn decent wages without having to beg for handouts. By choosing to continue profiting from high rental, what do you think?

Why are Singaporeans forced to rely on handouts when the PAP government has already:
– invested billions of tax dollars to construct excellent infrastructures for businesses
– forgo billions in tax revenue by reducing our corporate tax rate to the third-lowest in the region?

It appears foreign and local companies can only be profitable by depressing wages of Singaporeans. Does such an economic model serve Singaporeans?

There are too many flawed policies which, if Singaporeans do not put a stop to, will doom our country. PAP is not bothered about issues concerning ordinary Singaporeans.

As middle-ground voters who are in a position to put our country back on the right path, it is your responsibility to vote for a government which prioritises the well being of citizens above making money.

There may still be some fear after decades of propaganda but deep in your hearts, you know that a self-serving PAP will never serve Singaporeans.