I refer to my numerous feedback to the LTA on the rampant vandalism of public structures.
link link link

I am very disappointed that after 2 years of feedback, LTA still does not have a proper system of maintenance. What is going on at the LTA? Does it not matter that I have highlighted this issue to the MOT, the Minister for Law, AGO and even the PMO?

What is going on in the government? How is it possible a trivial issue has to be highlighted numerous times with no solution in sight?

On 7 May, the roof facade of Blk 85A (photo below) in Toa Payoh was vandalised. Officers from the CID and Tanglin Police Division immediately sprang into action, conducted investigations and arrested 5 teenagers within 2 days! 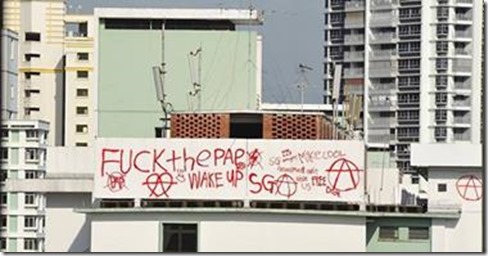 On the other hand, the government continues to turn a blind eye to thousands of vandalised public structures. This has been ongoing for years and has become acceptable. The media can confirm this for the government by visiting Pasir Ris Drive 1 and 3. Illegal adverts are found not in one corner of the estate but at prominent locations. They are in fact island wide. This clearly shows the LTA has neither discharged its basic maintenance responsibility nor taken my feedback seriously.

Just look at the thousands of illegal adverts in the vicinity of Aljuneid MRT station. (photos below) Do we really have a first world civil service?

In the Toa Payoh incident, the police had to conduct investigations and mounted an operation just to arrest five teenagers. In the case of Aljuneid, the police turned a blind eye for years although no operation was ever required as the contact numbers were provided on the adverts. (even MPs and grassroots pretended there was no vandalism)

Why the double standard? Is it due to the economic value of the advertisements? Since most adverts are real-estate related, mainly to serve PRCs, is the government being pro foreigner?

I would like to think only the LTA has been irresponsible and incompetent but there are vandalised structures belonging to other statutory boards.

The police have been turning a blind eye to rampant vandalism and will make a mockery of the law by charging the 5 teenagers with vandalism. I strongly suggest to the government to first find a permanent solution to a decade old vandalism issue as we do not want our law to be seen as having a double standard.

Please ensure our statutory boards implement a proper maintenance system and ALL public structures are not vandalised.

Thank you and have a nice day.

This entry was posted in EMAIL MINLAW, EMAIL TO PM LEE/MINISTERS/MPs/STAT BOARD CEOs ..., EMAIL VANDALISM. Bookmark the permalink.