(I have been trying to convince the LTA for more than a year that its maintenance regime leaves much to be desired. With regard to rampant vandalism of LTA structures, its ‘solution’ is actually accommodative and does not address the root cause i.e. the perception that public structures are allowed to be abused. I am approaching this issue from a legal perspective. I also hope your ministry could convince the LTA to address the issue in a cost-effective way instead of throwing taxpayers’ money at ‘solutions’. By doing so, it will free up resources (money, manpower) for more urgent issues. A few suggestions are also provided below.)

Singapore’s law on vandalism appears to have been selectively applied.

2 There have been a few high profile cases in the press i.e. Five men charged with vandalism 15 Nov 2013, “Sticker Lady” charged in court, etc. The rampant vandalism of public infrastructures have somehow been given the miss.

3 We are not merely talking about structures which are slightly defaced,

but those being regularly defaced by hundreds of illegal advertisements. (above structure (left) recently repainted)

LTA’s solution is to use anti-stick coating to lick the problem but it has already been highlighted that vandals have been using scotch tape (around entire structure, weather proofing) and cable ties, rendering anti-stick coating useless. 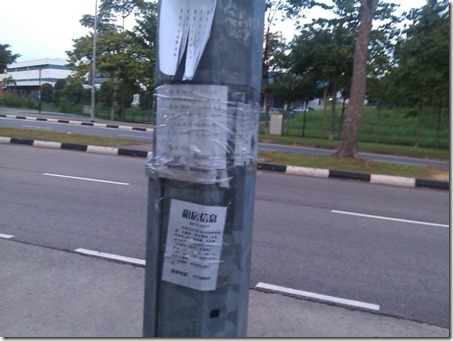 LTA says it has issued 248 fines for the first 9 months of this year despite the thousands screaming for its attention. It had also issued 674 fines for the whole of 2011 but again somehow misses the big picture. http://news.asiaone.com/news/singapore/illegal-ads-licked-anti-stick-coating?page=0%2C1

Fines have clearly not worked because there is little enforcement and maintenance. Anyway, a property developer would not mind paying the hundreds in fines for the use of public structures because it makes tens of thousands in profits. Property agents likewise. Fines are not a deterrent for the ‘big boys’ but only for the self employed/small businesses.

4 LTA – addressing issue from hardware perspective not the solution

This is a chronic issue which the authorities have to bear some responsibility for having allowed it to fester. That everyone feels entitled to such use of public property to further one’s personal business – this mindset needs to be changed.

Without even attempting to change this mindset, the LTA proposes a costly and most unnecessary solution to apply anti-stick coating on tens of thousands of structures.

5 Why allow vandalism law to be challenged so openly?

Unlike the case of “Sticker Lady” and others who left no trace, there are contact details on illegal advertisements. It is not possible for everyone of them to be ignorant of our law on vandalism.
Much resources were deployed to bring a few to court while those who blatantly challenged the law have continued to do so.

i Fines have not deterred vandalism in any visible manner. Perhaps the government should introduce a CWO of sorts (on the origin of the advert, not the runner) where illegal advertisers are made to remove a multiple of the number of their illegal adverts.

ii Since the majority of adverts are from the real estate industry, the CEA should be informed to advise all its members to cease vandalising public property with immediate effect.

iii Through the media, potential offenders must be ‘educated’ on the tough stand the government will be taking against vandalism, especially those providing such a ‘service’.

Minister Shanmugam may not agree with the above suggestions but I believe you would agree that the rampant vandalism of public structures must cease without further costs to the government.

Thank you and have a nice day.

The amount of vandalism along Pasir Ris Drive 1 is incredible and has been accepted as the norm. The worst area might be in the vicinity of Aljuneid MRT station. Email to PM Lee 13 Nov, LTA throwing taxpayers’ money at vandalism solution 29 April

This entry was posted in EMAIL LTA, EMAIL MINLAW, EMAIL TO PM LEE/MINISTERS/MPs/STAT BOARD CEOs ..., EMAIL VANDALISM. Bookmark the permalink.