I refer to my feedback dated 30 May and ST Forum letter ““Halt the rise of ‘trolley junkyards” dated 30 May.

You appear to have missed the gist of both feedback i.e. this is a chronic issue and must have been resulted from the inaction of the authorities.
(among many other issues) This issue does not only concern my Town Council.

I am highlighting this as a general problem where trolleys are abandoned in many different housing estates, on grass verge etc. and was hoping the government would be able to resolve this simple issue.

With reference to the reply (enclosed below), PRPTC’s ‘solution’ has been to make use of its officers to inform the respective supermarkets, NTUC among them.
This is anything but a solution.

The problem has also been compounded by foreign workers over the years.

Do you know that trolleys could come from more than about 1 km away?
‎ Monday, ‎3 ‎June, ‎2013

Being the highest paid civil servants, one would have expected a solution for this simple issue. And if such a simple issue has not solution, how is the civil service expected to resolve complex issues?
PRPTC’s ‘solution’ is akin to going round in circles.

There exist a number of ‘trolley bays’, not just in housing estates but even alongside expressways.
‎Tuesday, ‎28 ‎May, ‎2013 ‎Monday, ‎3 ‎June, ‎2013,

Despite a number of such permanent ‘trolley bays’, it is business as usual for the civil service. One could also conclude that the NParks/NEA has not inspected the location/work of its grass cutting contractors for years. It would be irresponsible to continue allowing public spaces to be used as dumping grounds for trolleys.

The only solution is to treat the issue as one of theft because these trolleys were taken out of the shopping mall premises without permission and intent to return them. The onus is thus placed on the supermarkets to resolve the issue. Unless the civil service has a better solution.

I will be very frank with Mr Ong, the civil service has been treating the symptoms of problems instead of eradicating the root causes. A continued educational approach is really not the solution but a very lazy way of really not doing anything meaningful.

The situation is getting more ridiculous by the day.
NTUC circus trolleys in Simei estate. 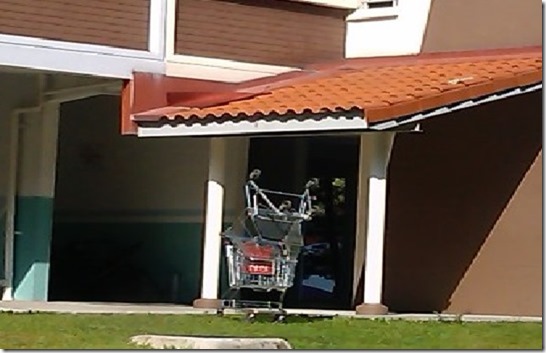 Conclusion
Town Councils should not be used as resources of businesses to locate their stolen assets. Is it really impossible to have a solution even for a small issue?

PS
The letter writer to ST Forum has provided feedback in vain. The common approach of the relevant authorities is similar to PRPTC’s where no solution is provided.
Having the last say (reply) in the press gives the appearance of seriousness in tackling the issue despite issues continuing to fester.
This has gone on for too long and needs to change.
Don’t treat feedback providers as fools because over time, Singaporeans get fed up and cease providing feedback altogether.
This has already happened.
There has to be some sort of KPI for civil servants and a good one would be whether the issue was resolved over a reasonable time frame.

With regards to your observation on abandoned trolleys, our town council will inform the supermarket concerned as and when our property officers spot such trolleys within the boundary so that the respective supermarkets will send their staff to collect them.

This entry was posted in EMAIL MISC, EMAIL TO PM LEE/MINISTERS/MPs/STAT BOARD CEOs ..., EMAIL TOWN COUNCIL. Bookmark the permalink.